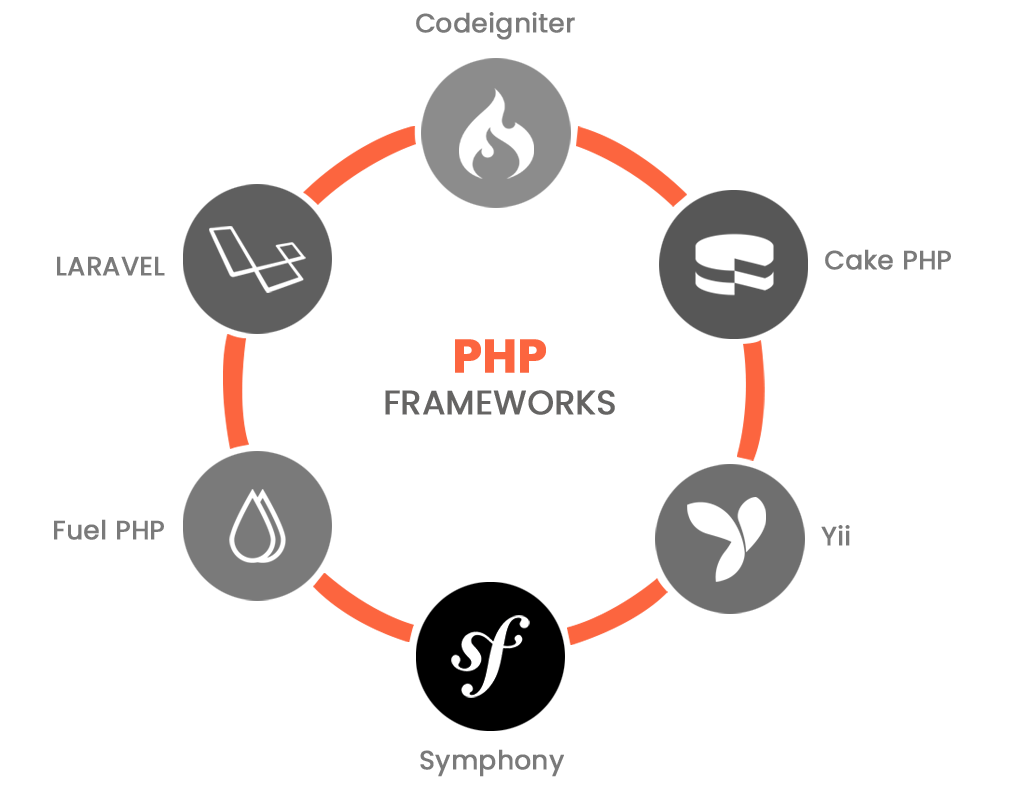 In recent days, PHP frameworks have become a great boon to websites and website developers as it allows any complex design, and of any sizes. The percentage of websites built using PHP codes is increasing day by day. This projects the popularity and importance of the PHP language for web development among all languages. Developing a website from scrape will be difficult using PHP code. Many companies prefer to hire PHP developers for developing effective websites for their business.

According to Net Server Survey in 2014, “the number of websites developed using PHP code crossed one billion”. This language is widely used by popular websites like Facebook and Wikipedia. More than 79% of websites use PHP codes to make the website look attractive and user-friendly. Usage of PHP shares remains constantly increasing over the last year.

Let’s see which PHP frameworks are most popular and why they are used,

So, What is a PHP framework?

A PHP framework is a platform used to design and streamline PHP web applications. The PHP framework consists of code libraries that are used for reducing to rewrite the code. You need not write every code instead you can just use these frameworks wherever required.

Why should we use a PHP framework?

Things to know about the PHP framework

If you are a new web app developer, there are few important things you need to know about the PHP framework. Learn and know your PHP basics well. If you have a good command of the language, you can easily pick up a suitable framework.

Try building some PHP applications of your own, apply the code set appropriately. By this, you will get a clear understanding of both frontend and backend requirements.

What are the top 7 PHP frameworks for web development?

The best 7 top frameworks are listed below to help you select the best one from it.

Laravel is one of the extremely popular frameworks used by most website developers. It is released in the year 2011. Though it is new, it is topping all the frameworks. You can handle complex structures using this and easily built new web applications that are effective and attractive. Reduces the complexity of performing common and repetitive tasks.

Most of the developers prefer using Laravel as there are lots of tutorial videos and learning materials are available with screenshots.

Symfony is launched in the year 2005 and is still in existence. It is a broad PHP framework that follows the standard norms of PHP and web. Most popular content management systems like Drupal, PHPBB(PHP Bulletin Board), and OroCRM use this framework.

Phalcon is one of the fastest and secure frameworks, launched in the year 2012. This framework is built with C and C++ language. It consists of highly optimized code that would consume low resources. It also supports all the modern features like controllers, routing options, Online Reputation Management, query language, auto-loading, translating, security, and much more.

Codeignitor is used by many website developers for more than a decade. It is preferred by many developers as it is fast and easy to understand. It saves lots of time and prevents development issues. Most of the business websites like shopping, entertainment, and sales-oriented industries use this framework. Hire web developers to make it more simple and effective.

It is released in the year 2008, also they have released new updates in the framework. It is gaining popularity recently among web app developers. It is an object-oriented framework without repetition in the code. It has rapid prototyping that allows a web-based interface to generate the required code.

It is open-source with refined microframeworks. It provides web app developers with everything they require. APIs and few generic services can be developed using this framework.

It is also comprised of the best middleware architecture. It allows URL routing, HTTP caching, encryption, and other templates.

Released in the year 2005, used widely by developers till date. It also supports today’s web development with modern techniques. CakePHP is the best tool for websites that require the highest level of security. Companies like Hyundai, BMW, and others use this to build and support their websites. It prevents cross-site request forgery, cross-site scripting, and much more.